Are you new in sport or you are simply out to fish some information about pickleball singles?

If yes, then you’ve landed on the right page.

We have covered Pickleball doubles in our previous posts, and now we are going to take you through the basics of pickleball singles so that you get a clear understanding of the differences.

We will also give you some amazing beginner tips to boost your confidence in your next game/trial.

The rules of pickleball singles are the same as those of doubles, only with a few variations

But if the serving team commits a fault, they lose a point and the opposing team gets a chance to serve.

Afterward, another bounce must also occur before the ball is served back to the opposing player.

If a bounce a serve doesn’t double bounce, then it’s a fault.

If a player returns a volleyed ball that hasn’t bounced in the kitchen, they lose a point.

Sometimes, a player might be allowed to stand in the no volley zone, but only to hit a ball that has already bounced.

However, the position of the server will largely depend on the current score of the game.

They can stand either left or right and give a diagonal serve to the opposing side of the court.

The scoring protocols for pickleball singles are similar to that of the doubles. The major difference here is that there are only two players in the court.

And of course, there are some more minor differences that you should note;

For instance, in singles scoring, players don’t have to call out the 3rd number. So they only have to call two numbers. The server calls out their score 1st followed by their opponent’s score.

Also, when serving in the singles, the player has to execute the serve from the right side of their court.

However, in case the score of the server is an odd number, then the player should serve from the left side of their court. For instance; 1, 3, 5, 7, 9 points.

Note; It’s ONLY the server’s score that’s important when determining the serving side.

If the server loses a point, then the serve is passed on to the receiver.

The scoring can be intimidating especially for beginners, but that shouldn’t worry you. You will master the concepts with a little more time and practice.

Watch this video on pickleball singles scoring. It should be easy to pick up after this;

When you compare serving in pickleball singles with that of doubles, honestly, the doubles one is simpler and not so demanding. I mean, you simply have to work on getting that ball over the net to the other side.

But in singles, for you to win, you have to work smart and use that serve as your ultimate offensive weapon.

Therefore, there’s no other way around it; you simply have to give a powerfully deep serve.

And we are not saying you hit it hard to any random side. But rather, focus on aiming your powerful serve at your opponent’s weaker side.

This means you have to take a few seconds to give them a quick survey to identify their weakness.

But if you can’t seem to direct the serve straight at the opponent, then at least hit deep down the middle.

The good thing about serving in singles lies in the fact that each player gets the chance to serve until they lose a point. So players can maximize on that.

Also, as already mentioned above, you will have to serve from the right if your score is even and from the left if it’s odd.

Don’t forget to say your score before calling out that of your opponent.

Faults occur when a player loses a serve. And there are various faults in a pickleball single, which include;

In simpler terms, the ball is said to be out of bounds.

Players should always let the ball bounce before hitting/receiving.

But if the ball gets to bounce twice as a player makes a continuous forward movement and off their paddle, then that isn’t a fault.

Tips for Beginners in Singles Pickleball

Yes, we agree that smashing is one of the greatest winning concepts in pickleball singles, but do exercise it with caution.

Remember, one wrong move can land you in a fault and that’s the last thing you want.

So, whenever you’re running forward for a smash, ensure to control your momentum, so that it doesn’t end up throwing you into the no volley zone.

And you can do this by practicing and mastering the jump stop.

Since you’re playing alone, you’re also solely responsible for your win or loss.

So always ensure your posture exhibits confidence. This will not only allow you to effectively monitor the court but also serve as an “intimidation” to your opponent.

To assume the ready position, stand with your knees slightly bent and your feet at shoulder length apart. The paddle should be between your knees, ready for the upcoming point.

Don’t know what we are talking about? Here’s a YouTube video to help you practice the “ready position.”

You might not have a teammate, but you can still play as if you have one.

For instance, ensure you direct the ball to land on the no-volley zone before your opponent approaches the net.

This way, you get to slow them down, thus curbing their power over you.

It’s a clever move to pull especially if you notice your opponent is far more experienced/powerful than you had imagined.

Exercising is an important part of any player.

Ensure you take a few minutes before the match to stretch.

This helps you regain your energy and force your mind to focus on the upcoming match.

Also, if you have been undergoing some stress, stretching diverts the negative energy and spreads the positive vibes that you require to win.

The best part of stretching is that it prepares your body (legs, arms, muscles, etc.) for the long and quick stretches they will be undergoing as you play.

What does Dink mean in pickleball?

In pickleball, a dink refers to a slower and softer shot that’s hit from around the no-volley zone.

It usually drops downward after it crossing the net and heads to land in your opponent’s kitchen area or at the feet of your opponent.

It’s most popular in doubles than singles.

What is an illegal serve in pickleball?

In pickleball, an illegal serve is when the serve doesn’t originate from the underhand and the contact with the ball is made above the waistline level.

Can you bounce the ball before you serve in pickleball?

Unknown to many, yes, players can bounce the ball before they serve in the pickleball game.

But the player MUST end-upholding it in their hand before tossing it.

How many serves do you get in singles pickleball?

In singles pickleball, players get only one serve like in the doubles. What changes is the serve execution as it depends on their points (even or odd)

If you have ever played or watched pickleball doubles, then it shouldn’t be difficult to grasp the concept of the singles.

This is because most of the rules, serving and faults are the same.

You just have to master a few differences and you will be ready to take your chances in the court.

While at it, remember to apply some of the tips we mentioned above and see what works best for you. 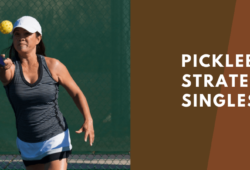 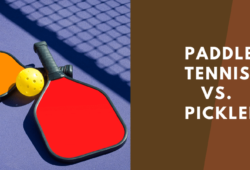 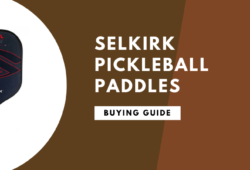