Are you looking to engage in a new sport? Then why not pick up squash?

This fast-paced, high-intensity game offers a great workout that you wouldn’t want to be missing out on.

Here’s a little fun fact for you: you burn more calories from an hour of playing squash than you do from running, soccer, cycling, or even yoga.

One of the reasons why playing squash is so awesome is because you don’t need much to get started.

As long as you have a pair of non-marking shoes, comfortable workout gear, a racquet, and a ball, you’re good to go.

While getting started in the game, you may wear your regular trainers that have non-marking soles.

Once you start playing regularly, however, then you would need to invest in squash-specific shoes.

Make sure the shoes have plenty of shock absorption and adequate ankle support.

Squash is an indoor sport, so expect it to get a little warm while playing.

For this reason, wearing shorts with a vest or a short-sleeved t-shirt would do.

You definitely want to play with a squash racquet and not a racquetball or tennis racquet.

However, squash racquets differ in a variety of factors, including weight, stiffness, size, and grip.

You’d want to head on to a sports store and seek knowledgeable advice from trained personnel concerning which squash racquet you should get.

Alternatively, instead of buying, you could hire a racquet from your local squash court center.

Squash balls are differentiated according to one’s level of play. Different balls will have different speeds and degrees of bounciness.

Beginner balls are bouncier, which eliminates the need to hit it very hard.

1.Always warm up the ball before a match. Trying to play with a cold ball is next to impossible.

A warm-up in squash involves players standing on either side of the court and hitting the ball cross-courts to each other. The players then switch sides to warm up on the other wall.

Officially rules provide for a 5-minute warm-up, but if a beginner and playing casually, feel free to take a little extra time.

Besides warming up the ball, a warm-up also helps to warm up the player’s body in preparation for the demanding game.

2. Deciding who gets to serve first is done by the spin of a racquet.

One player spins the racquet. Then, using the logo on the butt of the grip, the opponent guesses “up” or “down.”

3. A player only gets one serve attempt. Failure to execute a legal service will lead to the opponent immediately earning a point

4. For a service to be valid, the player must:

5. When a ball has been served, the opponent has the option to either volley it or let it bounce.

If the player lets it bounce, then the served ball has to bounce in the opposite back quarter of the court for it to count as a legal serve.

If an opponent wins the rally, they get to serve and decide which serving box to start from.

7. A player has to hit the ball before it bounces twice.

A good shot is one where the ball has to reach the front wall before bouncing on the floor. Before hitting the front wall, though, the ball can hit as many walls as the player chooses.

8. The ball can never hit the tin.

The tin is the strip of wood or metal running along the bottom of the front wall.

If a player loses a rally, the opponent earns a point.

10. Squash is played based on Point-A-Rally (PAR) scoring. Meaning, a point is earned each time the player wins a rally.

This way, anyone can earn a point, and not just the serving player.

Traditionally, the British system only allowed for a player to earn points when they are serving; but this system is not popularly used anymore.

11. Matches are often played to the best of five games, meaning the winning player has to win at least three games.

Each game is played to 9, 11, or 21 points depending on what the players decide upon.

In any instance, the winner has to win by two points.

12. There is such a thing at interference in squash.

Well, this is unavoidable, seeing as both a player and their opponent share the same side of the court.

In official tournaments, No Let, Let, and Stroke at called by a referee.

In casual play, the players have to agree on the call. Failure to reach an agreement results in playing a Let.

FAQ About How To Play Squash

Is Squash Hard to Play?

The first thing to keep in mind is that squash is a strenuous sport, so if you haven’t played a high impact sport before, then you’ll definitely have a harder time coping at first.

A round of squash will put a strain on your joints and on your heart as well.

That aside, squash is an exhilarating sport that’s relatively easy to learn as long as you master the necessary skills and rules of the game.

To make playing the game a little easier for a beginner, you will have to, first of all, spend a lot of time practicing to hit the ball correctly. This involves engaging both your forehand and backhand.

Don’t fret if you don’t get it all at once. With a little practice, patience, and a few tips and tricks learned along the way, you’ll be a fantastic player in no time.

How Do You Serve Squash for Beginners?

Before every serve, always take a moment to compose yourself and think about aiming for an exact spot on the front wall.

The idea is to try playing shots that are unplayable by the opponent. Hitting the side walls with your service is one way to do this, seeing as it will force them to execute the extremely difficult backhand volley.

The ideal stance to have here is one foot inside the service box and the other foot stepping towards the T-Zone.

Once you’ve hit the ball, avoid remaining behind. Always return to the T-Zone so that you’re ready for the next shot.

As far as the technique goes, perhaps this video will help:

Can You Serve Overhand in Squash?

Yes, you can serve overhand in squash.

An overhand serve is whereby you contact the ball at head or shoulder level.

Some players prefer this service because they can hit the ball at a faster rate, thereby placing pressure on the opponent.

This especially applies if the opponent is a fellow beginner as well.

The only downside is that a faster pace also translates into reduced accuracy.

When you serve overhand, the ball will fly with a downward trajectory, and this makes it easy for the opponent to volley the ball around waist level.

Basically, as much as you can use an overhand serve, it would not be advisable to use it too frequently. Perhaps only use it as a variation to the more precise underhand serve to throw off your opponent.

What Happens If the Ball Hits You in Squash?

Getting hit anywhere, by a fast-flying squash ball can be quite painful. This is why it’s essential to keep your eyes on the ball, but even the most careful player could end up getting hit unexpectedly.

If an opponent hits you with a ball during play, that counts as a Let if the ball would have otherwise hit the sidewall. A Let means that the point is played again.

If instead, the ball would have hit the front wall but hits you instead, then this counts as a Stroke, and the opponent earns a straight point.

In this second instance, it is regarded that you didn’t make enough effort to get out of the way, and in the process, you ended up preventing the opponent from taking a winning shot.

Squash can provide an array of fitness benefits, including helping a player lose weight and stay in shape.

As a result, you could burn between 700-1000 calories from an hour of playing squash, which is significantly higher compared to many other sports.

At the same time, this sport works both your upper and lower body, thereby toning your arms and torso.

There are immense benefits to playing squash.

Besides physical strength and fitness, this sport also promotes mental well-being, which is why it is such a great way of burning off work stress, frustration, and nervous energy.

So why don’t you do your cardiovascular system a favor and pick up a squash racquet? 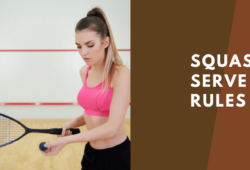 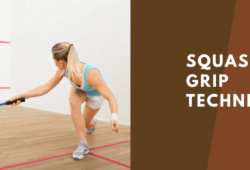 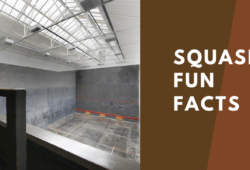