The doubles racquetball has all the rules that are applicable to the singles. However, there are certain additions and modifications to the official United States Racquetball Association (USAR) and International Racquet Association (IRA) rules.

In this article, we introduce you to some of the basic and important rules for racquetball doubles and also their implications on the game.

They are applicable for all the levels of games from club to the tournaments and championships across USA and rest of the world.

Team Composition: There will be two teams comprising of two players in each team. There are two divisions according to the age group, namely the adult and junior. Juniors in the age group less than 24. Adults are 24+. There could be sub-divisions with these two divisions based on the number of players and their age groups.

If the two players in a team have an age difference, they should play in the sub-division of the higher age group. In the adult division, the opposite rule applies. The same rule may apply if the division is made on skill levels. Changes to team composition may be made until the referee announces the start of the game.

Apparel: The teams (in leagues, tournaments, and championships) can have their own uniform with a T-shirt, shorts, racquetball shoes, and socks. Every T-shirt should have a number and team name. Every player must wear the USRA and IRA approved protective-eyewear. Games played at the club level make it mandatory to wear protective eyewear. They may wear informal garments that are not too loose or too offensive for viewing.

First Serve: Team winning the toss may choose the first serve. If he loses the rally, the serve goes to the other team. If the team wins a serve rally point, the next serve may be taken by any of the two players. The server has to bounce the ball on the floor and hit it directly onto the front wall.

Scoring Pattern: There shall be three games in the match. First two games shall be for 15 points and the third game for 11 points. Team reaching 15 points shall win the game. The point difference between teams could be only one (Ex: 15-14, 15-13, etc) or more.

The players (from any team) changes racquet holding hand. The players touch the ball other than the racquet during the rally.  The player makes a double service fault. You can refer to the other related rally winning rules in the USAR document.

Rally Directions: Once the ball comes into the rally, players can hit it onto side-walls, ceiling, back-wall, or front-wall at any point across length and width. The ball should hit front-wall before hitting the floor. Otherwise, it will be considered as an invalid shot. The referee shall decide on awarding the point to serving team depending on rally winning rules.

Service Rule: Every serve should hit the ball onto the front-wall first. It has to cross the short-line and stay within the receiving line while bouncing from the front wall. It should not hit any part of side-walls, ceiling or back-wall directly.

Serve-Faults: If the server comes out of service zone before the returning ball crosses short-line, it is a fault. He has to re-serve. Any deliberate attempt to block the opponents’ view of the ball is a fault. It can have the penalty as decided by the referee.

For the drive serve, the server has to stay within doubles-box. The rule is relaxed for other types of serves (ex: lob, cross-court, hard/soft-Z, etc).

Hit-Faults:  If a player hits the ball twice while rallying, it is a hit-fault.

Obstruction-Fault: Direct physical contact of the opponent or racquet during the rallies is a fault. The referee may impose a penalty if he finds the obstruction is intentional.

Crossing the receiving line may happen during follow-up. But he should not cross the short-line in such cases. There will be an exception for the struck ball which comes off the back-wall rebound. If the receivers handle the ball or touch the ball with any part of their body, it is a fault.

Hindrance-Fault: Any attempt to block ball-visibility to the opponent players will be considered as a fault. If the attempt is found to be deliberate, the referee shall impose a penalty. Hitting the opponent’s body with the ball is also considered to be a hindrance.

What else is there?

We have listed the basic and most important rules for racquetball doubles game. You can practice following them from the stage of training. Your body and mind can get conditioned to them with time. 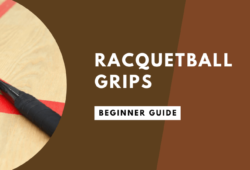